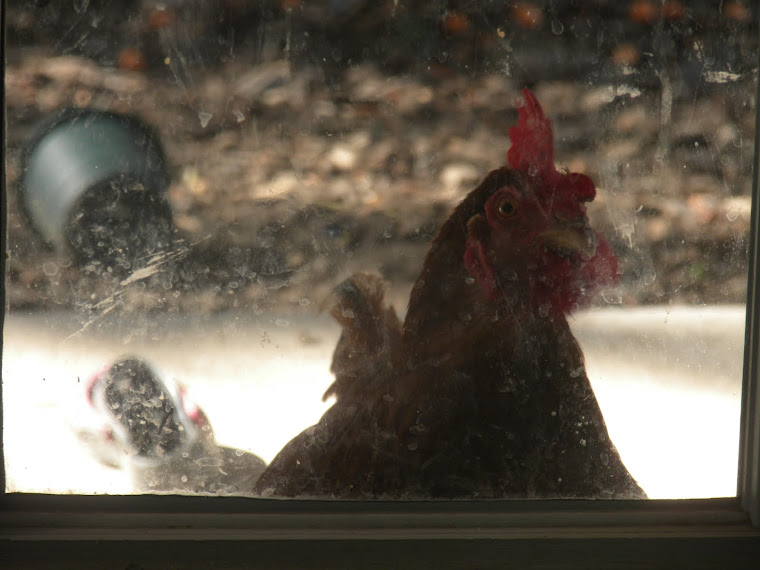 The One That Started it All

The chicken on the heading is Rainbow. As mentioned before, she is the one that started it all. This is the story of how she did it. Oh, by the way, I am T.

In third grade, we hatched chicks in our class for Easter. I was one of the kids that was permitted to take a chick home--if the one we claimed ever hatched, which mine did. So on the day that we were to take them home, my teacher (as she later told us) was driving to the school that morning with the chicks' cage on top of her car. As she pulled into the school parking lot, though, the cage fell off, scattering the food, the straw, and the chicks, too. Luckily, a fifth grade class was outside and they helped my teacher pick up all the chicks. But it was just my luck that my chick was forgotten! When I came in to claim my chick that morning, it was missing! Being not very self-conscious of what I looked like at school, I burst into tears.

The teacher suggested that since one of my buddies was late, and his chick was safe and sound, I should take his. My teacher had said that if you came in late, you might not get your chick. So my mom took the chick (being black, my friend called him Blackie Chan), and left. One of the other parents was nice enough to go searching in the parking lot for my lost chick (by then, my friend and his mom had arrived). Meanwhile, all of us kids were gluing our faces to the window, looking. Suddenly someone pointed it out, saying, "Hey! The chick is under that car over there!" Soon, my chick was brought in, shivering. My friend's mom took my chick home with her, and later, after school, we switched chicks.


When I got home, I was greeted by another chick that my mom had apparently bought to keep Rainbow, as I had by now named her, company. That one was Angela.


That is the story of "The One that Started it All". And I'm pretty sure this explains why Rainbow seems to be the easiest one to catch--at least when I'm catching her.
Posted by Annie at 8:17 AM